Indian paintings have traditionally been classified according to regional styles or dynastic periods, with an emphasis on subject matter and narrative content. Recent scholarship, however, has begun to securely link innovations in style with specific artists and their lineages. Together with a careful study of artist’s inscriptions and scribal colophons, it is now possible to construct a more precise chronology of the development of Indian painting.

This major loan exhibition is devoted to the connoisseurship of Indian painting, with some 220 works selected according to identifiable hands and named artists. The exhibition dispels the notion of anonymity in Indian art. The high points of artistic innovation in the history of Indian painting are demonstrated through works by forty of the greatest Indian painters, some of whom are identified for the first time. Each artist is represented in the exhibition by five to six seminal works.

Structured chronologically, the exhibition features the artistic achievement of individual artists in each period. Highlights include: A Sufi Sage, after the European personification of melancholia, Dolor by Farrukh Beg, an extraordinary painting representing the last chapter of the artist’s long career (1615, Museum of Islamic Art, Doha); Peafowl attributed to Mansur, a master of observation of the natural world (ca. 1610, private collection); Jahangir receives Prince Khurram at Ajmer on his return from the Mewar campaign: page from the Windsor Padshahnama by Balchand, a master of composition (ca. 1635, Royal Collection, Royal Library, Windsor); Shiva and Parvati Playing Chaupad by Pahari, a superb painting with intense saturated color, bold but sparse composition, and stylized landscape, depicting the divine couple relaxing on a tiger skin playing chaupad, a form of chess (1694–95), Metropolitan Museum); and Emperor Muhammad Shah with Falcon Viewing his Garden at Sunset from a Palanquin attributed to Chitarman II (ca. 1730, Boston Museum of Fine Arts). 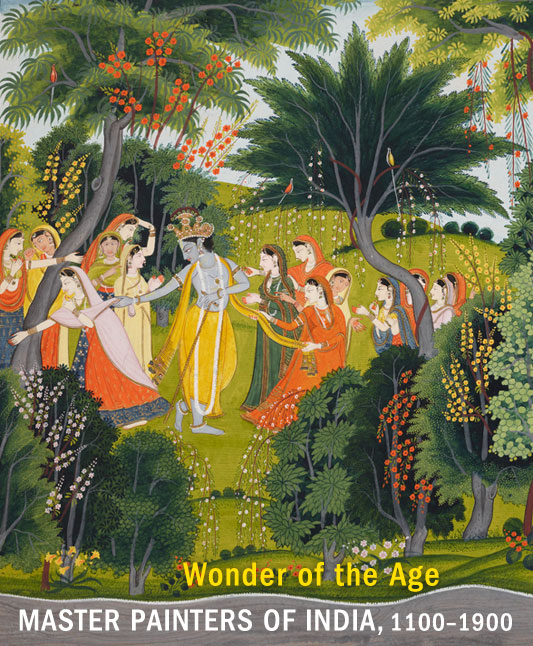